A Georgia K-9 that was shot during a traffic-stop confrontation that killed a police officer has lost an eye, but was released from a veterinary hospital Saturday and is expected to make a full recovery.

Indi, a K-9 officer with the DeKalb County Police Department, was shot in the head on Thursday, east of Atlanta. The gunman, identified by the Georgia Bureau of Investigation as 33-year-old Brandon Taylor, ran from a traffic stop and killed Officer Edgar Isidro Flores, a 24-year-old who had just graduated from the police academy last year, investigators said.

After he killed Flores, Taylor then ran again before opening fire on the K-9, which had tracked him down, investigators added. Three SWAT officers then fired at Taylor, who later was pronounced dead.

OFFICERS KILLED IN THE LINE OF DUTY IN 2018

The police department wrote on an Instagram post that after Indi was shot, the dog received “the most compassionate and professional care.” The K-9 officer lost its right eye, but otherwise was expected to make a full recovery.

As Indi left the hospital with its handler, Officer Norman Larsen, the two were greeted “by a line of police cars and officers and K9 handlers” from neighboring towns and counties who “came to pay their respect to Indi and his handler and wish them a speedy recovery.” 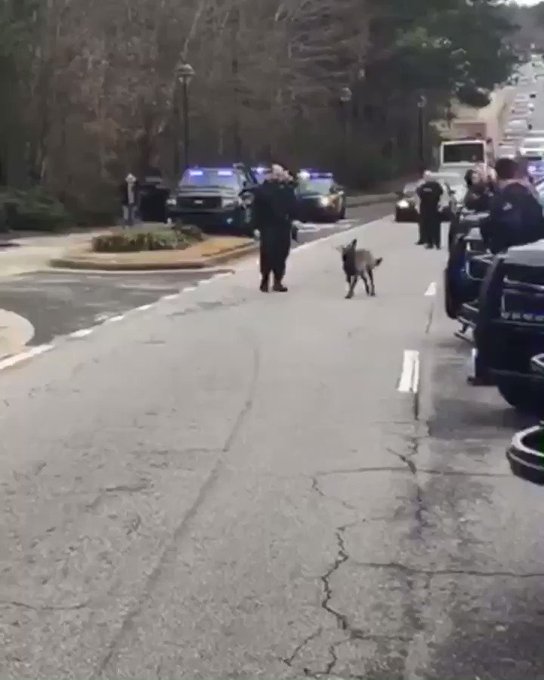 Officials said Indi will be evaluated soon to see if the dog could return to the police force. But, if Indi can no longer work, police said the dog “certainly earned his retirement” and will “live out the remainder of his life” with Larsen and his family.

The Georgia Police K9 Foundation stated online that the organization planned to honor Indi — described as a “true warrior” — with its “Purple Heart” award because of the dog’s heroic actions. The Obituary for Mr. Huey Griffin of Daviston (Tallapoosa & Clay...