After drizzle puts a damper on Christmas Day, the threat for severe weather is expected to ramp up from Texas to the lower Mississippi Valley Wednesday into Thursday.

Isolated tornadoes are among the dangers that residents and holiday visitors may face in the days immediately following Christmas.

As a snowstorm begins to create travel nightmares across the north-central United States, this post-Christmas severe weather event may commence across central Texas on Wednesday afternoon before targeting the lower Mississippi Valley on Thursday. 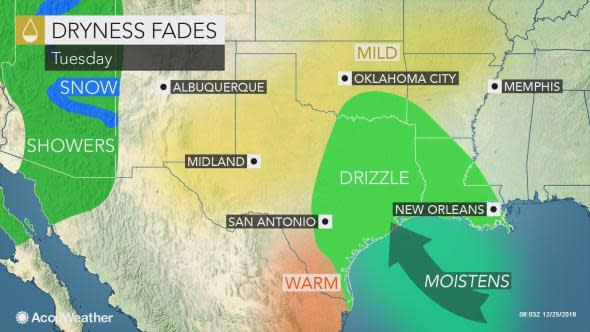 Cities in the path of the thunderstorms threatening Texas on Wednesday afternoon and night include Abilene, San Angelo, San Antonio, Austin, Dallas and Tyler. The severe risk may extend northward into part of southwestern Oklahoma.

The strongest thunderstorms will be capable of producing damaging winds, flooding downpours and hail. The risk for isolated tornadoes may be greatest in central Texas.

“In addition to that main line of severe thunderstorms on Wednesday afternoon and night, there may be a separate area that erupts in southeastern Texas and southwestern Louisiana,” said AccuWeather Senior Meteorologist Rob Miller.

“These violent thunderstorms can bring a risk of flash flooding and damaging winds to Houston and Galveston, Texas; and Lake Charles, Louisiana,” Miller said. “An isolated tornado cannot be ruled out along the Interstate-10 corridor.” 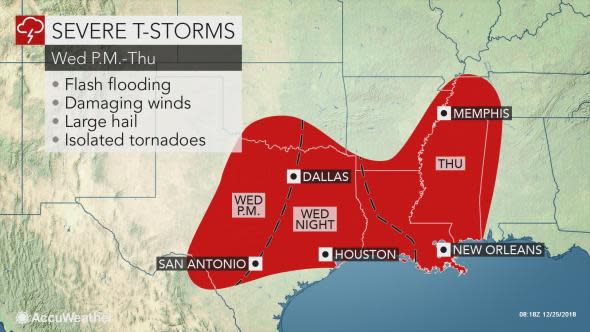 Miller is urging residents and holiday visitors in the area to remain especially vigilant to severe weather notifications.

“There may be an added danger, as the tornadoes can be obscured by rain or the earlier December nightfall,” he said.

Download the free AccuWeather app and enable audible alerts on your cell phone to receive severe weather bulletins. For those visiting the area, now is the time to review where to seek shelter should a tornado or flooding rain strike.

Even in the absence of severe weather and flooding, travelers should prepare for flight delays and hazards on area roadways. This includes stretches of interstates 10, 20, 35 and 37.

Downpours and spray from other vehicles can dramatically reduce visibility and heighten the risk of vehicles hydroplaning when traveling at highway speeds.

The threat for heavy rain and localized flooding may not be confined to the severe weather risk zone. Soaking rain is expected northward across the central Plains and to the southern fringe of the snow/wintry mix zone on Wednesday.

As the rain (accompanied by gusty winds) shifts to the lower Midwest states, the severe weather threat may focus on the lower Mississippi Valley on Thursday. 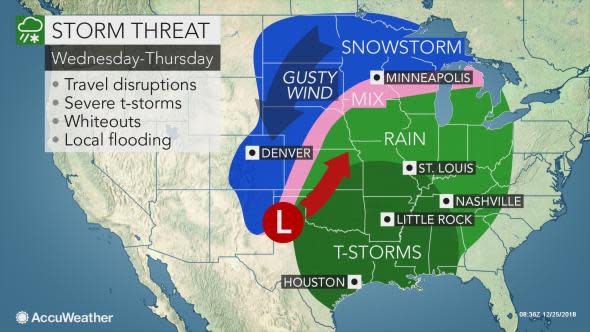 Cities at risk on Thursday include New Orleans and Baton Rouge, Louisiana; Gulfport, Jackson and Tupelo, Mississippi; and Memphis, Tennessee. The danger may also expand eastward into Alabama and target Birmingham, Montgomery and Mobile.

“The greatest risks with the strongest thunderstorms on Thursday can be heavy rain and damaging winds,” said Miller, “but those toward the Gulf Coast should remain vigilant for an isolated tornado.”

The rain can be heavy enough to trigger flooding in urban and poor-drainage areas, as well as along small streams. Poor traveling conditions may transpire on interstates 10, 20, 22, 40, 55 and 59 for a time.

AccuWeather meteorologists will also be monitoring the potential for a separate area of locally severe thunderstorms to erupt around St. Louis on Thursday.

While the severe weather may be quick to clear Texas by Thursday, areas to the east may endure an extended risk of flash flooding.

There are indications that the band of rain and thunderstorms may dramatically slow its forward speed over a part of the Southeast late this week. At this time, this looks to happen over the corridor from the upper Gulf Coast to the southern Appalachians.

If that occurs and rounds of downpours repeat over the same communities, more widespread flooding may result.

Additional rain can keep dampening the Southeast for the final weekend of 2018. The risk for pockets of heavy rain threatening to trigger new flooding is being monitored.