Tyler Trent, the former Purdue student who inspired countless sports fans with his gratitude and grace, died from a rare form of bone cancer on Tuesday. He was 20 years old.

Trent first earned the admiration of the Boilermakers football team by camping outside the stadium in September 2017 prior to the team’s Big Ten home opener against No. 8 Michigan. He posed for a picture with head coach Jeff Brohm the morning of the game. Trent did not initially tell Brohm that he had spent the previous afternoon at a chemotherapy session to treat osteosarcoma.

“You just see a guy dressed in Purdue garb head-to-toe with a big smile on his face,” Brohm said in an interview this past October. “He didn’t tell me his story. He didn’t tell me what he was going through. He just had a positive attitude.”

“While there are no words to ease the hurt at times like this, we hope some comfort can be found in knowing what an inspiration Tyler is to our student-athletes, coaches, staff and fans,” the statement read. “The entire Purdue Athletics family has been touched by his courageous battle, positive spirit and unwavering faith. Tyler was the embodiment of a true Boilermaker who will live on in each of us. We will forever be #TylerStrong.” 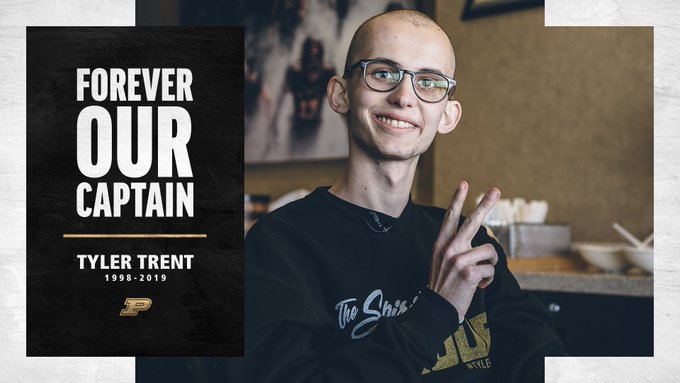 Trent was honorary bowl captain and went to midfield for the pregame coin toss on Friday when the Boilermakers lost to Auburn in the Franklin American Mortgage Music City Bowl after Indianapolis Colts owner Jim Irsay flew Trent and his family to Nashville.

Trent’s smile and his extensive black-and-gold wardrobe became a familiar sight to millions of college football fans during the fall after media coverage of his story provided him with the opportunity to share his positive attitude. He served as an honorary captain, collected a bevy of awards and raised more than $100,000 for cancer research in his final months.

Purdue quarterback David Blough, who developed a strong bond with Trent, remembered his friend in a series of tweets Tuesday night. 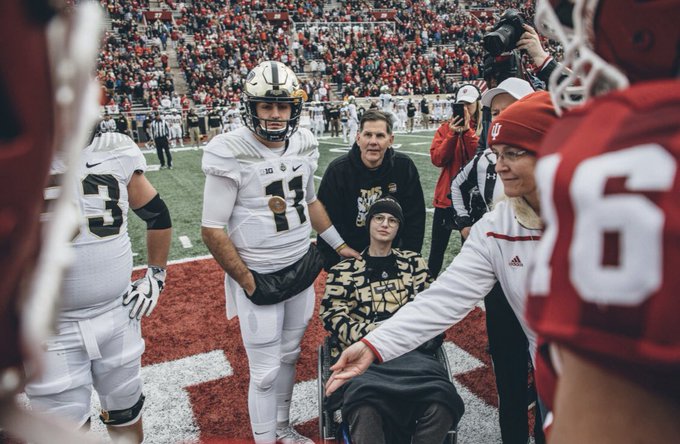 Rest In Peace to my friend, my captain, my brother, my hero. You inspired us all by the way you lived. I love you, and I can’t wait to see you again. Forever #TylerStrong.

Doctors first discovered Trent’s cancer when he broke his arm while throwing a Frisbee in 2014. Surgery replaced the bone in the upper half of his right arm that fall, and after nine months of chemotherapy treatment the cancer went into remission. The Carmel, Indiana, native earned a scholarship to Purdue before the cancer returned at the end of his senior year of high school. He needed surgery to replace his pelvic bone less than two weeks before the start of his first semester at Purdue.

“When I found out I had cancer for the second time,” Trent told ESPN this fall, “the first thing I said to my doctors was, ‘I don’t care how hard it is, I’m going to school on time.'”

Trent made it to West Lafayette in time for his first day of college classes.

Trent’s cancer spread to his spine in 2018, and he left campus to return to his family’s home in September. Boilermakers players came to his home the following weekend to present him with the game ball from a win over Nebraska and to pray with him.

Trent and his family made plans to attend an Oct. 20 Purdue home game against then-undefeated Ohio State. They assumed at the time that it might be his last trip to campus for a Boilermakers sporting event. He was profiled in a feature on College GameDay that Saturday morning, and despite a particularly taxing day dealing with his illness the day before, Trent made it to Ross-Ade Stadium for the game.

“The immediate future in my mind is that Purdue beats Ohio State next Saturday,” Trent said during the GameDay feature.

Purdue, a two-touchdown underdog, beat Ohio State in a landslide.

Millions of viewers learned about Trent’s connection to the Boilermakers football team during the victory. In the two months that followed, he won the Disney Spirit Award and the Sagamore of the Wabash award, the highest civilian award given to Indiana citizens. He co-hosted an episode of SportsCenter. He wrote guest columns for the Indianapolis Star. A bobblehead doll was made in his likeness.

Trent traveled to Atlanta to accept the Disney Spirit Award at the College Football Awards Show on Dec. 6 and received a standing ovation. While on stage, he described one more prediction that he got right.

“A year ago, I prayed I’d have the opportunity to share my story,” he said. “And now that’s coming true.” INFORMATION FOR ALL: BY THE ALEXANDER CITY CHAMBER OF COMMERCE