Though state education officials have yet to publish a full report card, the details of measures that comprise Alabama’s recent school report card grades went live on the state department of education’s website on Jan. 5.

An analysis of those details show a mixed bag of ups and downs in the six categories of measures used from one year to the next, but offers clues as to why grades went up for many schools.

Year over year, of the 1,246 schools that received a letter grade for both 2018 and 2017, the majority of schools earned more achievement and growth points, increased both their high school graduation rates and measures of college and career readiness, but many also saw a rise in students missing 15 or more days of school, known as chronic absenteeism.

The spreadsheet posted on the department’s website doesn’t contain both years’ grades, but AL.com pulled those together for readers to compare and see which schools improved their performance in which areas from one year to the next. Seventy-three schools were given grades this year for the first time and are not included in the breakdown.

First, a quick look at how the measures are calculated. [Click here for the full technical manual.]

Schools earn points in up to six categories:

The Alabama Alternate Assessment is given to students with significant disabilities for tested grades. Students who move in and out of schools and districts, known as student “churn,” often face academic struggles and excluding students who have been enrolled for less than that amount of time from the accountability measure is seen as a fairer method of the impact the current school has had. Students were only counted if they were considered “full academic year” students, meaning they were enrolled in a school or district for 85 percent of the school year and is still enrolled in the final month of school.

Important points to remember about report cards and indicators

Report cards will be standard fare for at least the next few years, so it’s important to understand what the measures show. Each measure is represented by a number from zero to 100. That score does not always represent a percentage of students meeting the measure.

For example, the academic achievement measure is weighted and so does not represent a percentage.

Academic growth is also weighted, and the weights of both measures differ from each other. [Confused yet? Don’t worry, you won’t be tested.]

When those weights are applied to achievement and growth, students that are high-performers on tests and/or show high levels of growth earn a school extra points, while those who do not perform well on tests or show low levels of growth can negatively impact a school’s point score.

Therefore, if a school earns 85 points in the academic growth category, it is not correct to say 85 percent of students showed growth on the test. That number just means the school earned 85 points. The unweighted growth and achievement numbers are not provided by the state.

In the chronic absenteeism measure, a lower number is better. The number shown on the report card is the actual percentage of students who miss 15 or more days of school. That rate includes all students in the school, not just those that are tested. So if the number is 7.9, then it is accurate to say 7.9 percent of students at the school were chronically absent. 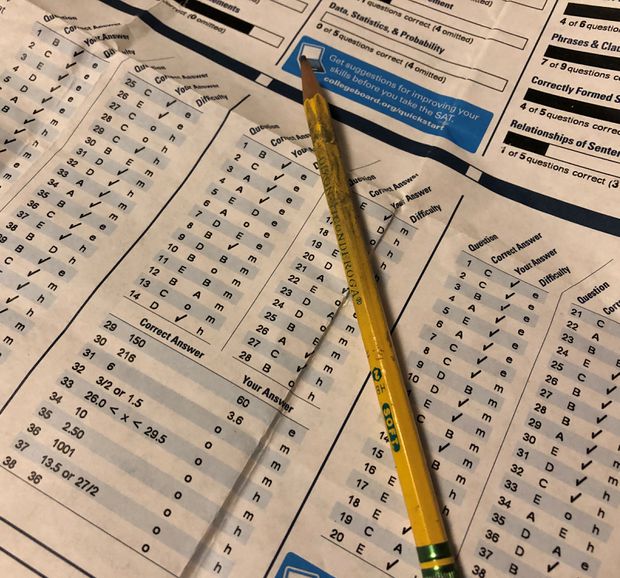 After each of the indicators is calculated individually, a second round of weighting is applied. For schools without a 12th grade, academic achievement and growth each account for 40 percent of the school’s grade. Chronic absenteeism accounts for 15 percent of the grade, and the rate of progress of student learning the English language accounts for 5 percent. However, if a school doesn’t have 20 or more students classified as English learners, then growth accounts for 45 percent of the total point value.

As a result, in 810 schools in Alabama where no measure of English learner progress was calculated, academic growth accounted for 45 percent of the grade.

If a school does not have an academic growth measure, then academic achievement grows to 80 percent of the school’s grade. That was not the case for any schools in Alabama in 2018.

For the 361 Alabama schools with a 12th grade, the weights look like this:

If any other measures are unavailable, there are steps to be followed to reconfigure the formula.

AL.com previously reported that more schools earned A’s and B’s on the 2018 report card, and while reasons differ a bit from school to school, higher point scores in achievement and growth are the likely reason for the higher grades.

Also, nearly five times as many schools earned more points in achievement than last year as those that earned fewer points. Across the state, the range was from a loss of 19 points to a gain of 37 points.

Check out your school’s detailed grades

Report card proponents agree that parents need to know what’s in the report card in order for school improvement to occur. So AL.com has provided a way for you to not only look at this year’s indicators’ scores but also a way to compare them to last year. These interactives are difficult to view on a mobile phone and are better viewed on a tablet, laptop or desktop. We’ve also provided links to larger versions made specifically for desktop monitors to allow you to dig in.

First up is a way to view scores for 2018 one school system at a time. That allows for a comparison among schools in large school systems. Click the top of a column to sort high to low, low to high, or alphabetical order. The color of the bar indicates the overall letter grade the school received. The width of the bar indicates the percentage of students in poverty at the school. The wider the bar, the higher the poverty level. In the mobile version, only numbers are shown, and the poverty indicator isn’t visible.

Finally, click this link to view all of the 2018 indicators for all schools in Alabama, or you can narrow down by system. It’s just too much information to put into a smaller interactive.

No word yet on when the required federal information will be online, but AL.com will let you know when it is.

So, what changed at the school level?

Looking at all of the schools in the state, some interesting trends emerged.