Home News UPDATE WITH PIC, Man who killed 5 in Louisiana was dating one...
News

UPDATE WITH PIC, Man who killed 5 in Louisiana was dating one of the victims, police say (Could be headed East) Dakota Theriot, WANTED FOR MURDER OF 5 PEOPLE IN LOUISIANA

(CNN)    A man wanted in the killing of five people in Louisiana was dating one of the victims — and briefly lived with her family before the shooting rampage that also left her father and brother dead, authorities said.

In addition to his girlfriend and her relatives, Dakota Theriot, 21, allegedly killed his parents in a separate but related shooting Saturday in Gonzalez, police said.
Elizabeth and Keith Theriot, both 50, were at their home near Baton Rouge when the suspect killed them, Ascension Parish Sheriff Bobby Webre said.
When authorities arrived at the scene, Keith Theriot was still alive, and told them his son shot them, authorities said.
A manhunt is underway for the suspect, who’s considered armed.

Another crime scene 30 miles away

His girlfriend, Summer Ernest, and her relatives were found dead in a home 30 miles away. The dead included her father, Billy Ernest, 43, and her brother Tanner Ernest, 17, according to authorities.
Theriot was dating Summer and had lived with the Ernests for several weeks, Livingston Parish Sheriff Jason Ard said. He was recently asked to leave the residence and not return, according to authorities.
A 7-year old and a 1-year-old were found in the home, but were unharmed and are now with their mother. 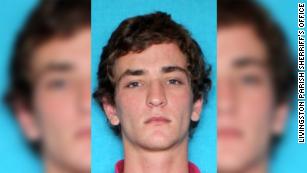 Dakota Theriot
Authorities believe the shootings stemmed from a “boyfriend [and] girlfriend type of dispute,” CNN affiliate WAFB reported.
“This is probably one of the worst domestic violence incidents I’ve seen in quite a while,” Webre said. “For a young man to walk into a bedroom and kill his mother and his father, and then kill friends in Livingston that he had a connection with.”
The suspect has been charged with two counts of first-degree murder, illegal use of weapons and home invasion.
There were no red flags ahead of the two shootings Saturday morning and other than a simple possession of drug paraphernalia charge, Theriot had no other run-ins with the Livingston Parish Sheriff’s Office, Ard said.

Theriot was last seen driving a gray and silver 2004 Dodge pickup truck with the Louisiana license plate number C583809 that belongs to the Ernest family, authorities said. He had on a blue sweatshirt, blue jeans and white tennis shoes, and is believed to be traveling east in the Dodge pickup, Ard and Webre said.
He has two tattoos — a cross on his chest and a yin-yang symbol on his forearm.
Authorities believe he is armed with at least one handgun.
“We will use all of our resources — all the resources that we have available to us — to bring this murderer to justice,” Webre said. “We don’t know what kind of resources he has or how far he can run. But we don’t think he has great means and a lot of resources.”
Anyone with information is asked to call Crime Stoppers at (225) 344-7867, your local police or 911.

Facebook
Twitter
Pinterest
Previous articleIRS will need at least a year to recover from government shutdown, watchdog tells Congress
Next articleDo you ever think, “I wonder if I’m an alcoholic?” Well, you probably are! I AM!

By Ricky Price, ALBUGLE, LLC I incorrectly reported in a story yesterday the a former Department Head at the City of Lanett, Tony Chandler was...
Read more
News