Sadie Grace Andrews died after falling into a grease trap while playing outside an Auburn restaurant. A new law that requires locking lids is now being enforced statewide. (Contributed photo)

More than a year after an Alabama child died in a restaurant grease trap and nine months after the governor signed a law requiring locking lids to prevent another death, statewide enforcement appears to be in place.

A split vote by the Mobile County Commission means the law will be implemented in Mobile. That follows a December start for enforcement in most of the state.

It was October 2017 when the tragic death of three-year-old Sadie Grace Andrews made headlines. In that case, the girl was playing with siblings outside an ice cream shop when she stepped on the unsecured lid of a trap. It flipped open, according to reports at the time, and she fell in and drowned.

In the state legislature’s next session, Ala. Sen. Tom Whatley, (R-Auburn) proposed legislation to require covers that have locking mechanisms and that are heavy enough to support the weight of a person or a vehicle without opening accidentally. Ivey signed the bill into law in April 2018. 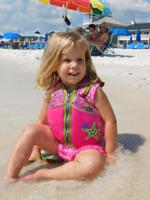 Sadie Grace Andrews, 3, died in October after falling into a grease trap outside an ice cream shop in Auburn.

While that action prompted celebration, there still was work to be done. The act signed by Ivey specified that it would become active “on the first day of the third month following its passage and approval by the Governor.” It also said that it would fall to the Department of Public Health “shall adopt rules for the implementation and administration of this act.”

Fast forward to Thursday, when the Mobile County Commission voted 2-1 to authorize a local fine of $100 a day for noncompliant businesses. Commissioners Connie Hudson and Merceria Ludgood supported the move, while Commissioner Jerry Carl voted against it.

Carl said he felt the measure is a governmental attempt to solve a problem that the free market can handle on its own.

“The reason I voted against it is very simple,” Carl said. “We have so many laws on the books now we’re not enforcing. I feel like strapping another law, another penalty, another fine on businesses, at this point, especially for this issue … I’m sure without a doubt that the insurance companies are going to, if they haven’t they’re going to come back with something to address that. Because it is a huge liability.”

Potential liability for a death, as in the case of Andrews, provides a strong motivation for insurers to mandate locking grease trap lids for businesses, Carl said. “The free market can address this a whole lot better than a fine,” he said. “I’m tired of small businesses getting all this stuff strapped on them.”

Carl was in a minority: Ludgood said the penalty imposed by the measure was “not a fee it’s a fine.” Hudson said unsecured grease traps were “extremely dangerous.”

Mobile County’s health department is an anomaly: Along with Jefferson County’s, it’s actually older than the Alabama Department of Public Health. Mark Sestak with the state agency said it began enforcement in December, after a few months spreading the word about the new policy during inspections.

In December, 26 restaurants statewide were cited for unsecured grease traps, said Sestak, the deputy director of the department’s division of Milk, Food and Lodging. Told they’d have to shut down until the issue was fixed, most if not all of them resolved the situation the same day the citation was issued, he said.

Sestak said he didn’t have final numbers for January, but it appeared the total would be lower than in December.

Bruce Braden, Environmental Health Program Manager for the Jefferson County Department of Health, said his department’s inspectors hadn’t yet come across any violations, but were fully prepared to issue shutdown orders and impose fines if they did.

He said he did not expect to find many. He said he thought the Jefferson County Environmental Services Department, which oversees the sewer system, had already encouraged businesses to address the issue through its grease control program.

Stephanie Woods-Crawford, the Mobile County Health Department’s bureau director for Environmental Health and Preparedness, said the MCHD, like the state agency, had likewise used the last few months to survey local grease traps and spread the word about the new policy to businesses. It applies not just to restaurants but to hotels, schools, daycares and others that have commercial-class kitchen facilities.

Woods-Crawford said inspectors had found one unsecured grease trap in December and wasn’t aware of any found so far in January. But if any are found in the future, the MCHD will be able to levy the fine. Because it’s a county institution, the MCHD requires fees and fines to be approved by the county commission, she said.

Now that that step has been taken, the state law has some teeth locally, Woods-Crawford said.

“We are bound to follow the law as it is written by the state,” she said.

Last Seen In 1986, Halley’s Comet Will Make Its Presence Known... More than 9,000 marijuana convictions dismissed in latest case of cities...