Sgt. Kelvin Ansari of the Savannah Police Department was shot and killed May 11, 2019.  Sgt. Ansari was a graduate of Troy University.

Ansari served 21 years in the US Army before joining the police department in Georgia. There, he worked his way from patrol officer to investigator to sergeant.
But his lifetime of public service ended Saturday night, when Ansari responded to a robbery investigation.
Officers approached a vehicle matching the description in the robbery call, and gunfire broke out, Savannah police said.
Ansari was shot and killed. Another officer was wounded but was treated and released. The suspect was also wounded and later died. 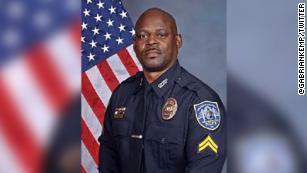 Sgt. Kelvin Ansari of the Savannah Police Department was shot and killed May 11, 2019
“Last night, we lost a great man,” Savannah Police Department Chief Roy Minter said at a press conference Sunday. “We lost a man who spent a substantial portion of his life protecting our country and protecting our community.”
Ansari was raised in Charlotte, North Carolina, and earned a degree in criminal justice from Troy University.
He is survived by his wife and four children, Minter said.
The Georgia Bureau of Investigation is investigating the incident, Minter said.

CNN’s Theresa Waldrop and Rebekah Riess contributed to this report.

City of Auburn to help those affected by Borbet closure

The Obituary for Mr. Charles A Carlisle UPDATE: Substitute teacher in custody after gun in pocket goes off...