The guided-missile cruiser USS Chancellorsville is seen in the Philippine Sea in March.

Hong Kong (CNN)The United States and Russian navies are at odds over an apparent near collision in the Pacific Friday with each side blaming the other.

The US and Russian warships came somewhere between 50 feet and 165 feet of each other, according to the two opposing reports, with both sides alleging their ships were forced to perform emergency maneuvers to avoid a collision.
“A Russian destroyer …. made an unsafe maneuver against USS Chancellorsville, closing to 50-100 feet, putting the safety of her crew and ship at risk,” US Navy spokesman Cmdr. Clayton Doss told CNN in a statement.
“This unsafe action forced Chancellorsville to execute all engines back full and to maneuver to avoid collision,” Doss said.
The US guided-missile cruiser was traveling in a straight line and trying to recover its helicopter when the incident occurred, he said.
“We consider Russia’s actions during this interaction as unsafe and unprofessional,” Doss said. 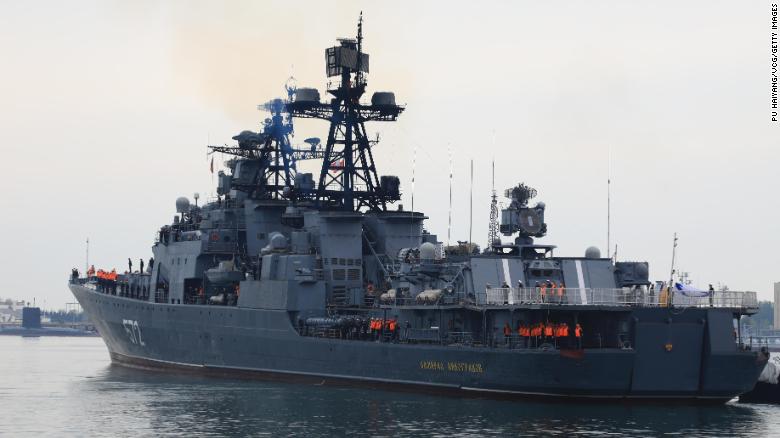 The Russian destroyer Admiral Vinogradov arrives at a port to attend China-Russia Joint Sea 2019 naval exercise on April 29, 2019, in Qingdao, China.
The US account was contradicted by Russia’s Pacific Fleet, which claimed it was the US ship that instigated the incident, according to comments carried by the state-run RIA-Novosti news agency.
A US official tells CNN the US Navy is attempting to declassify images to show what happened to discount the Russian account claiming that the US was at fault.
“When moving (on) parallel courses of a detachment of ships of the Pacific Fleet and a carrier group of the US Navy, the cruiser Chancellorsville suddenly changed its direction and crossed within 50 meters of the Admiral Vinogradov,” forcing the Russian destroyer to take emergency evasive action, the report said.
The US Navy said the incident occurred in the Philippine Sea while the Russian report said it happened in the East China Sea. The boundary between the two bodies of water is the Senakaku Islands (also known as the Diaoyu islands in China), to the south of Japan and east of Taiwan.
The incident comes just days after the US Navy accused Russia of intercepting a US aircraft flying in international airspace over the Mediterranean Sea three times in just under three hours.
The second of the three interactions “was determined to be unsafe” due to the Russian aircraft “conducting a high speed pass directly in front of the mission aircraft, which put our pilots and crew at risk,” the US Navy said.

CNN’s Barbara Starr and Mary Ilyushina contributed to this report.