ATLANTA — That loud noise you heard on Sunday might at first have seemed like it was the collective barfing of all of the people watching perhaps the worst Super Bowl in history. But it wasn’t. It was a seismic shift in the narrative of two of the biggest names in the history of the sport.

Tom Brady has long been viewed as the true star behind this Patriots dynasty. The face of it. The golden boy. The GOAT. And Bill Belichick was the guy sitting in a darkened room. The curmudgeon. The hoodie. The alchemist.

Super Bowl LIII changed all of that. In a primal, almost Mesozoic game in which defenses and ugliness ruled, Belichick showed more vividly than ever before that he is the master—he is the one at the heart of the Patriots’ six Super Bowl wins in nine tries.

Brady struggled, throwing an interception on his first pass and completing 21 of 35 passes without a touchdown overall. He looked more like Eli Manning than the best quarterback ever. And what happened? The Patriots won anyway.

They won in a game that had the foul stench of Belichick’s style all over it, with Belichick gleefully acting as a brilliant villain stealing the Rams‘ glory.

This wasn’t Brady shredding the Rams. This was Belichick doing it from the sideline, the classroom and his big, beautiful brain.

Brady over Belichick? Not anymore. That script has flipped thanks to a 13-3 Patriots win that was a defensive masterpiece put on by the best head coach to ever do it.

What Belichick did to the Rams offense will go down in history. He utterly obliterated his younger counterpart, Sean McVay, and reduced quarterback Jared Goff to a panicked lump who just chucked the football into the air and hoped it landed somewhere good. The way Belichick crawled into the heads of McVay and Goff should be a misdemeanor. 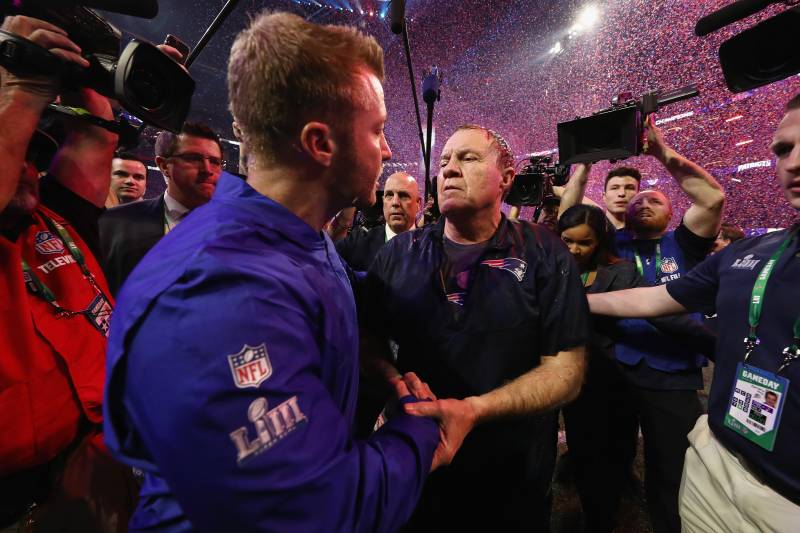 “I’m pretty numb right now,” said McVay after the game, “but definitely, I got outcoached.”

Belichick is known for taking away one facet, or player, from an offense. In this game, he somehow took everything the Rams do away.

Take the way the Patriots took away the run. They held Todd Gurley to 35 yards on 10 attempts and C.J. Anderson, who was hot coming into the game, to 22 yards rushing. Rams offensive lineman Andrew Whitworth said the Patriots did it by stacking the interior of the line consistently with six players, forcing the Rams to run to the outside. But when the backs would bounce outside the numbers, there were multiple Patriots waiting.

“We can change things up on a dime,” said linebacker Dont’a Hightower. Meaning, they can change what they do from game to game, or even quarter to quarter. They are that smart and well-coached. 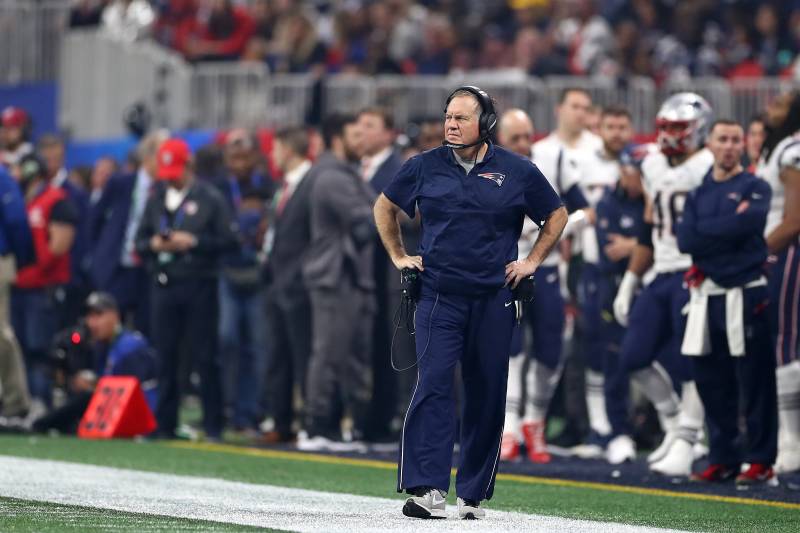 The Rams were clearly stunned by some of the things Belichick did. The Patriots defense ran stunts against the Rams that looked to confuse blockers. Goff was constantly hit. And that’s where Belichick’s most impressive work showed: his total deconstruction of Goff. It was both remarkable to watch and jarring to see.

Goff finished 19-of-38 for 229 yards, was sacked four times and had a passer rating of 57.9. The numbers are bad but don’t do justice to how bad he was. The Patriots weren’t hesitant after the game to talk about how they felt their defense could just force Goff into throwing errant passes under pressure.

A good example happened after the Patriots took a 10-3 lead with about seven minutes left. The Rams were able to move the football to the New England 27 with about four minutes remaining. Then Goff, under pressure, lobbed an unthinkable pass up high for Brandin Cooks. It was tracked down with ease by defensive back Stephon Gilmore.

I knew he was going to throw it up.

He chucked it up.

“I can’t throw those up there,” Goff admitted.

“They were throwing everything at us, and we had a hard time moving the ball.”

After the game, McVay didn’t just look like a deer in the headlights. He looked like the spotlight was far too big for him. That’s the Belichick Effect.

So many times, it’s been Brady who leaves opponents staring into space. And who gets the credit after. On Sunday, he was mostly held in check until late. The score was 3-3 after three quarters, the lowest total score at that point in the game in Super Bowl history. It was simply uncharted territory in many ways, one of the few times during the Brady-Belichick era when Brady was almost a backstory. 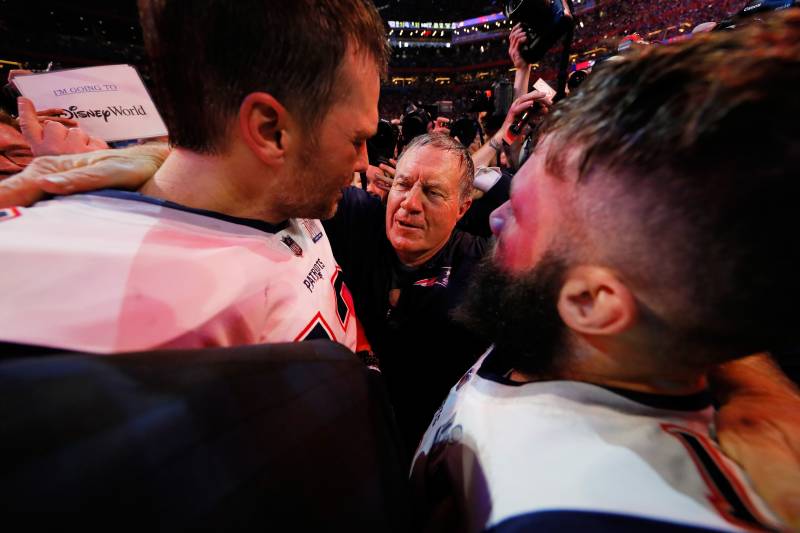 It was all Belichick.

Belichick had primed the Patriots for the moment all year. Players said they hung newspaper and internet headlines in the complex—the ones that said how the Patriots dynasty was over. The mind games were always being played.

In total, the results of the Rams drives were eight punts, a field goal, another punt, an interception and a missed field goal. That is a Jetsian level of ineptitude.

The Rams are only the second team in Super Bowl history not to score a touchdown. The last team before them was Miami 47 years ago in Super Bowl VI. As ESPN Stats & Info pointed out, 27 of the Rams’ 60 plays went for zero or negative yards: 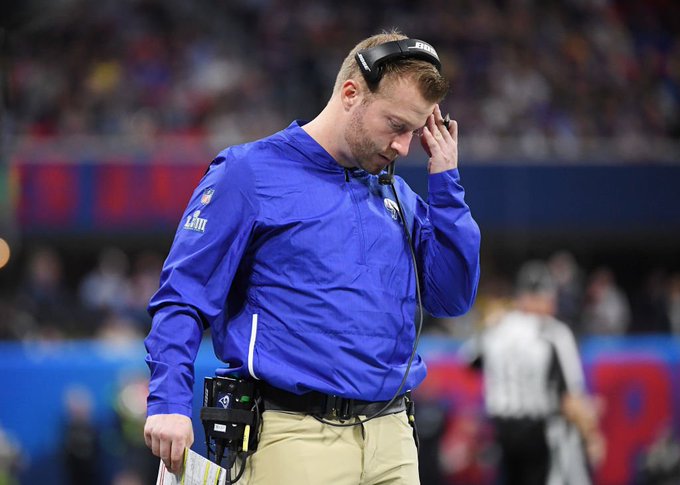 The Rams are the 2nd team in #SuperBowl history to fail to score a touchdown (1971 Dolphins in Super Bowl VI).

One other piece of data that puts Belichick’s place in the Brady-Belichick hierarchy in perspective: This was Brady’s fifth postseason game without a touchdown pass. The Patriots’ record in those five games, according to the NFL, is 5-0. When Brady struggles, Belichick is there to pick up the pieces.

In this case, Belichick showed he can be both the pieces of the puzzle and the solver of it.

Belichick said little after the game that’s quotable. As usual. He spoke of how no one gave them a chance all year. Some of that is true, some of it is hyperbole. All typical Belichick.

But we now see him a little bit differently.

Not in the shadows behind Brady and this dynasty. The one truly responsible for it.